The Places that we Work: LIBERIA

The Tikki Hywood Foundation has been exceptionally fortunate to have the opportunity to work throughout Africa. It is just not possible to be everywhere to implement our methodology and care. We need to collaborate and work with other like-minded organisations in order to reach our common goal, which is to rescue, rehabilitate and release wildlife into safe spaces.
In February 2017 The Foundation was contacted by The Libassa Wildlife Sanctuary to assist with the rehabilitation of their first-ever pangolin. Her name was Lies, she was a juvenile White-bellied pangolin and weighed 360g. Lisa Hywood guided the team and explained the steps in the rehabilitation process of this special creature. Lies eventually got released on March 11, 2018, and will forever have the title of first officially rehabilitated and released pangolin in Liberia.

The Libassa Wildlife Sanctuary is the only wildlife sanctuary in Liberia (and neighbouring countries) to rescue, rehabilitate and release different species of wild animals that are victims of the illegal bushmeat and pet trade. The sanctuary officially opened on May 7, 2017, and is a registered NGO in partnership with the Libassa Ecolodge and the Forestry Development Authority (FDA). So far, 426 animals have entered the sanctuary of which 290 have been released back into the wild. The sanctuary takes in primates, antelopes, birds (of prey), reptiles, small carnivores and of course pangolins.

“A single person or an organization on its own is not conservation. Conservation is collaboration and involvement from all stakeholders for the benefit of the cause you are fighting” – Lisa Hywood

Lisa Hywood travelled to Liberia in 2017 and met little Leis: “It is so important for us to be able to see the natural behaviour of the species we aim at conserving in order to understand them further and to assist with their rehabilitation. The program that Libassa Wildlife Sanctuary has adopted to hand raise white and black-bellied pangolin is based on the same program we have developed here in Zimbabwe for the ground pangolin.  Now that I have spent time with the white-bellied I will be able to garner a greater understanding for this species” – Lisa Hywood 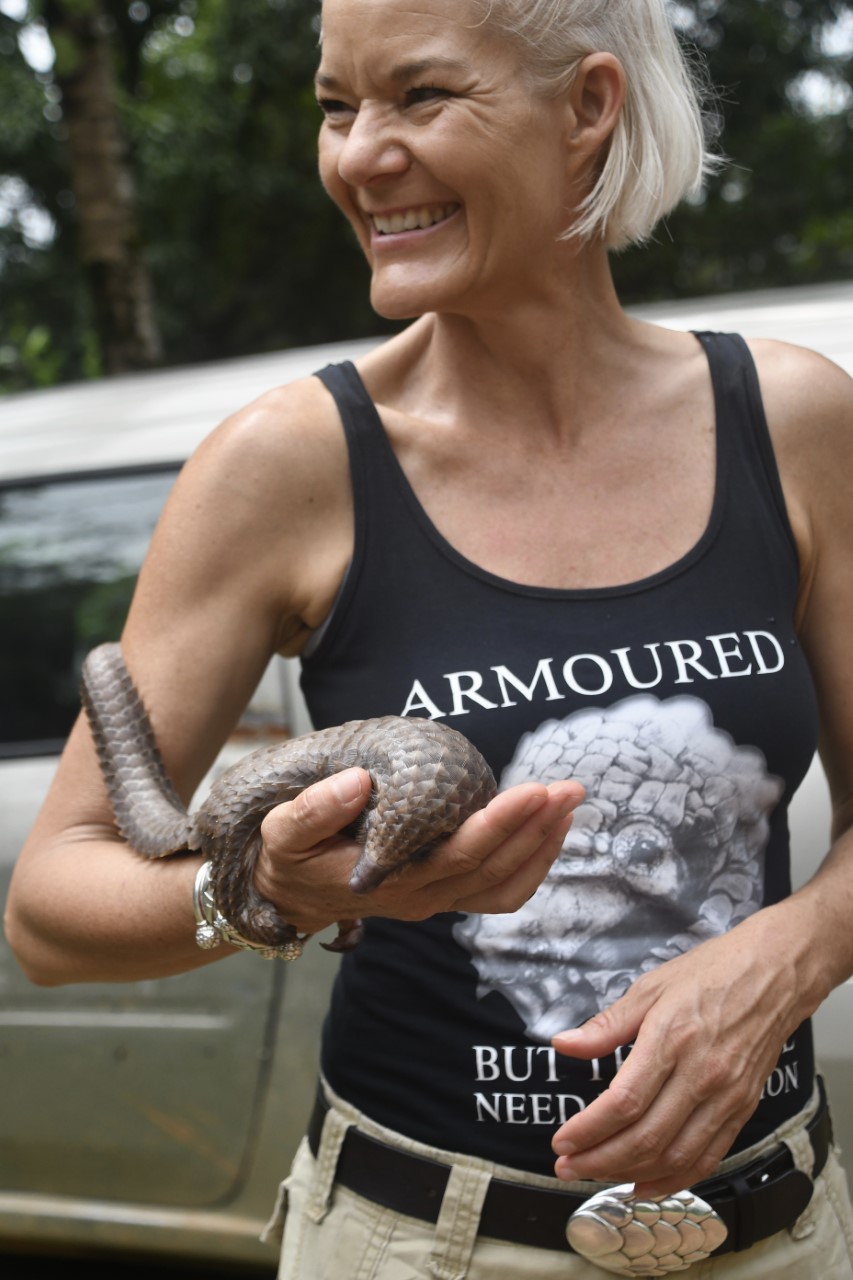 The sanctuary has since grown, and more pangolins have come in. The Tikki Hywood Foundation is always on standby to assist with any advice needed. Through the Foundation, the Sanctuary is given the necessary funds to pay the salaries for additional pangolin walkers, it is able to maintain and improve the facilities to meet the need for pangolins and completed building a “pangolin room” in 2019.

The dedicated pangolin treatment room at the Libassa Wildlife Sanctuary

The Tikki Hywood Foundations approach to conservation goes beyond the care for the animals. Not only have the team at Libassa learnt a lot about the care of pangolin, but have discussed law enforcement, release sites and how the sanctuary could improve its facilities and care. It is always interesting to learn from other organisations who have the experience. Libassa Wildlife Sanctuary is still implementing processes and procedures shared by The Tikki Hywood Foundation on a day to day basis.

The sanctuary’s latest rescue was not an easy one: on May 15, 2020, an adult male pangolin was seen being carried upside down a motorbike. They were able to rescue the pangolin, but the suspect managed to escape. It was clear from the start that the pangolin has severe neurological issues and had a cut on the head and probably received a blow to the head. He was unable to walk, eat or drink and was very spastic. He had to be force-fed day and night and was given medication as recommended by Tikki Hywood Foundation.

This adult male had to be hand-fed when he came into the sanctuary, June 2020

After a few weeks, he was able to drink by himself but still wouldn’t eat on his own. After about 3 weeks he slowly started taking ants, ant eggs and termites from a bowl. His ability to walk improved on a weekly basis and the spasms disappeared. Although he was eating well, and after being dewormed, he was not picking up weight as well as he should. But he was strong, healthy and had regained coordination over his body, resulting in the decision to release him.

He survived his ordeal and is now free, June 2020

At the moment, the sanctuary still has one baby Black-bellied pangolin in care, who had to be bottle-fed upon arrival. She has been weaned a few months ago and is growing fast! 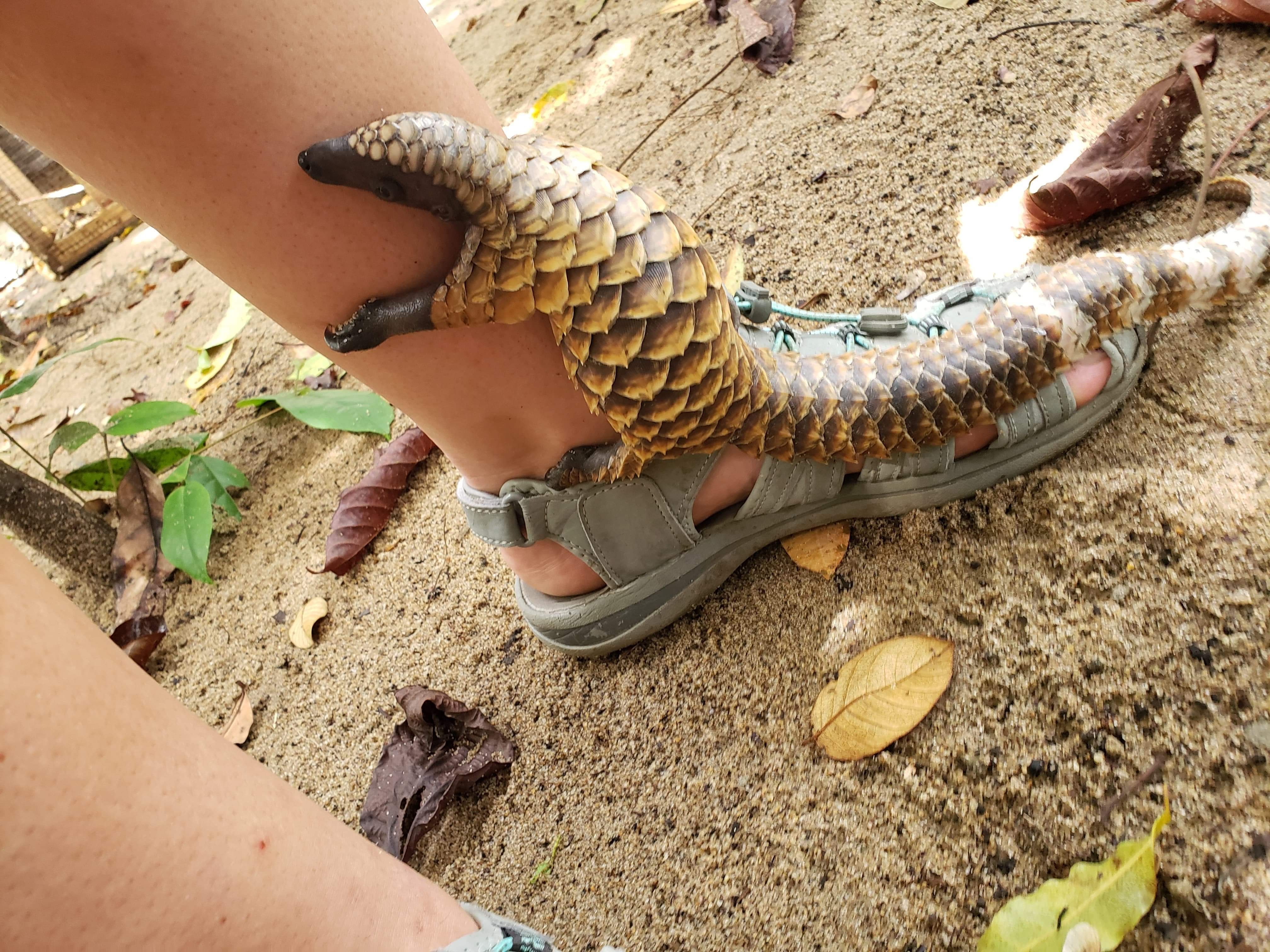